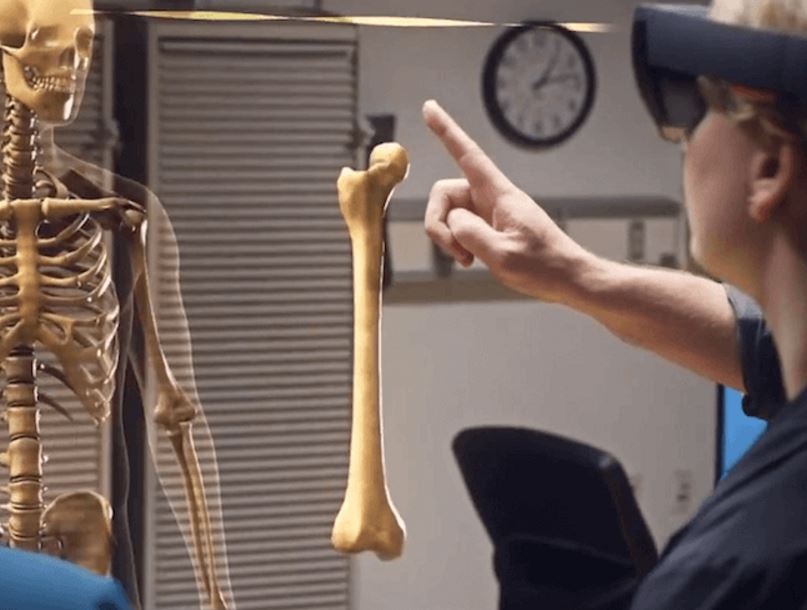 The digital contact lens patented by Google aims to change the course of diabetes management by measuring blood glucose levels from tears. While the prototype is going through vigorous testing, regulations must prepare to quickly allow this disruptive technology to enter the market and benefit patients. Microsoft Hololens can also change medical education and how we look at the world by projecting digital information onto what we are seeing. A clinic in Germany started experimenting with an application using augmented reality on iPads in the OR. During operations, surgeons can see through anatomical structures such as blood vessels in the liver without opening organs therefore they can perform more precise excisions.

Ian Pearson wrote in his book, You Tomorrow, about the possibility that one day we will be able to create digital selves based on neurological information. It means we could upload our minds to a computer and live on in a digital form. As Google hired Ray Kurzweil to create the ultimate artificial intelligence controlled brain, this opportunity should not be so far away. We might have been looking for the secret of immortality in the wrong places.

There are already famous examples of real-life cyborgs, and I am truly convinced that such creatures will not only populate the terrain of sci-fi movies, but they will be everywhere around us in the very near future. The ‘cyborg-craze’ will eventually start with a new generation of hipsters who implant devices and technologies in their bodies just to look cooler. Advances in future medical technology will not just repair physical disadvantages such as impaired eyesight but will create superhuman powers from having the eyesight of an eagle to having the hearing of a bat. While a patient wearing implanted defibrillators or pacemakers can also be added to the group of cyborgs, I expect to see more cases when patients ask for the implantation of a certain device without having medical problems.

If guns and other objects can be printed now and the biotechnology industry is working on printing even living cells; why would the appearance of 3D printed drugs be surprising? It will destroy and re-design the whole pharmaceutical world, but regulation will be a huge challenge as anyone will be able to print any kind of drugs that contain patented molecules at home. Bionic ears and simpler organs will be printed at the patient’s bedside.

There are already examples of 3D printing used in medicine. Through the e-NABLING the Future project, a global network of passionate volunteers enable volunteers, doctors or anyone on the field to make a difference by literally “giving a helping hand” to those in need by sharing 3D Printing designs, video tutorials and other information about building prosthetic hands. Success stories come from all over the world: there are now children and adults with super-hero style or more traditionally shaped prosthetic hands in Chile, Ghana, Indonesia and many more countries.

Adherence and compliance represent crucial issues in improving patients’ health and decreasing the cost of delivering healthcare. Several start-ups have targeted this issue with different solutions such as a pill bottle that glows blue when a medication dose should be taken and red when a dose is missed (winner of the Healthcare Innovation World Cup); or tiny digestible sensors that can be placed in pills and can transmit pill digestion data to physicians and family members. While patients do not like the term adherence as they want to be partners with their caregivers rather than following orders, health insurance companies will use more and more data to check whether the patients comply with their prescriptions to decrease their insurance costs. The wildly popular Pokemon Go motivates people to walk more which might lead to fighting obesity while playing a game.

Regarding technological development, there is always a risk for the emergence of so far unknown illnesses and conditions. New types of diseases will appear due to the excessive use of virtual reality solutions in gaming and other industries including healthcare. Examples include virtual post-traumatic stress disorder (v-PTSD) which might be the diagnosis for gamers who participate in large virtual battles wearing VR masks (such as Call of Duty of Battlefield) and experience similar symptoms as those soldiers who fought in real wars. Virtual reality as an extension of online activity and particularly that of gaming might also cause addiction. Expect to see ICD codes assigned to such new conditions.

The intelligent surgical knife (iKnife) was developed by Zoltan Takats of Imperial College London and works by using an old technology where an electrical current heats tissue to make incisions with minimal blood loss. With the iKnife, the vaporized smoke is analyzed by a mass spectrometer to detect the chemicals in the biological sample. This means it can identify whether the tissue is malignant real-time. Surgeons will love this surgical Jedi knife which can significantly reduce the length of operations.

While better and better data input solutions arise, we will probably not even need hardware to add data to a laptop or PC as screens and keyboards will be projected on the wall or on the table making it simple and accessible everywhere in the clinical settings. Holographic and virtual keyboards will make us forget about smartphones and tablets. Only small projectors will be needed, while the data will be stored exclusively in the cloud.

Medical communication is something that affects all patients and medical professionals worldwide without exceptions. This is one reason why social media has the potential to become a huge “mind machine” making it possible to transmit, share, crowdsource and store medical pieces of information either for e-patients or medical professionals if such social platforms are used in a proper way. Don’t underestimate the power of digital/medical communication.

Radiology is one of the fastest growing and developing areas of medicine, therefore this might be the specialty in which we can expect to see the biggest steps in developments. One multi-functional machine will be able to detect plenty of medical problems, biomarkers and symptoms at once. Naturally, artists and movies are already way ahead of us: check out the machine used in the film, Elysium. With one quick check-up it tells you what percentage of your cells are cancer free.